The Maritime Works Package was awarded to McConnell Dowell and Heron Construction in March 2014, and that October Heron mobilised the Machiavelli and two split hopper barges to Webb Dock and commenced dredging 1.1 million m3 of material to a design depth of 13.5 and 15.5m. Dredging of the first area was completed on schedule and the first 500m of wharf was handed over to the Port of Melbourne Corporation on time.

This complex project required the use of lockout systems on the dredge to prevent contacting with underwater structures including a submerged combi-pile structure. In a world first, a dredge spud system was also used to improve the material model for the project, and all wharf faces were water jetted using an underwater pump attached to the bucket of the Machiavelli.

All material placed in the Port’s dredge material ground (DMG) required tracking and pinpoint accuracy of placement. In total, more than 2,700 barges of material were placed on underwater bund walls or in the DMG. Four kilometers of bund wall was trimmed by the Machiavelli, vastly improving the storage capacity of the DMG for the Port of Melbourne Corporation.

Three additional stages of the project were handed over as scheduled or ahead of time, with a total dredge volume of more than 1.8 million m3.

At handover all dredge areas and disposal areas met the stringent design criteria of the Port Capacity Project, and the project was completed with 150,000 man hours LTI free. 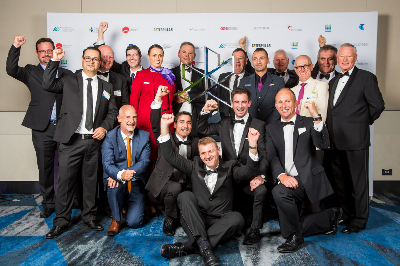